The quarry at Tarlee

From 1929 onwards a chatty column entitled Out among the People was established at first in the The Register News-Pictorial (Adelaide, SA : 1929 - 1931)  A similar heading and style of writing was carried through to several other newspapers including the Observer, the Advertiser and the Chronicle. This article from 1954 provides a brief outline of the uses of  bluestone quarried just north of Tarlee.

Talking of bluestone reminds us that this product of a Tarlee quarry has found favor in Adelaide. Even the little railway station bui lding up there is a fine bit of work, as you will have noted when the north train passes through there.

This bluestone has been used in the old Adelaide railway and many other stations, foundations for big Adelaide public buildings and kerbing stones in Adelaide streets.

I have since learnt that it can be seen in the wall round Whinham College, North Adelaide.

Mr. Buckley told me that 100 men worked in the Tarlee quarry. Its stone was used in the rather nice Catholic Church at Tarlee. That stone, he said, was first carted to Gilbert Town, not far up the road.

'The old Gilbert Hotel was there,' he explained. 'You can see the letter G in the mileposts from here to Clare Bowmans owned the paddock the hotel was on; Mclnerneys own it now.

Next, the stone was transferred to Navan, between Riverton and Tarlee. Then the Archbishop decided the church should be at Tarlee. Mr Colbert gave the land for it.'

One of the earlier mentions of work at the quarry, 1899, indicated that stone was being used for kerbing in Adelaide and significant buillding projects.


Work has been resumed in the Tarlee quarry and a great quantity of Stone is being removed, making work for a number of the unemployed in the township. The stone, I believe, is being conveyed to Islington for building the Government work shops. For building purposes this stone has a great reputation. A great quantity, I understand, was us»d in building' the new Parliament House, beside other large buildings in different parts of the colony.

Tarlee, a small town, a large contribution to the South Australia's buildings and roads.
- April 23, 2019 No comments:

A factory and a house

Illustrations from Trove help tell the story of Tarlee, a small rural town in South Australia in the early 1900s. In 1908, the year my father Edward John Horgan was born, the local Kapunda Herald newspaper published this story about a new factory built in Tarlee.

Throughout the years since its establishment, this prominent building has had several owners and a variety of businesses have made it their home. 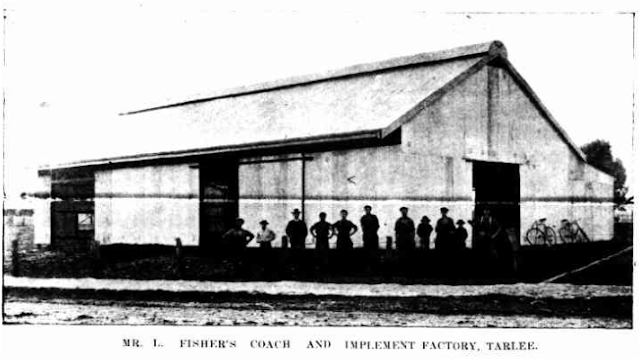 For many years Tarlee, though never a town of pretension, was practically at a standstill. During the last two or three years, with the increased agricultural prosperity of the district, business has improved, and there are signs of expansion in the town. The most conspicuous of these signs is the extension of the agricultural implement industry under the management of Mr. L. Fisher.

Mr. Fisher is well-known in the Mid North as a manufacturer of ploughs, cultivators, and other farm implements, and since his establishment at Tarlee business has grown so much as to necessitate larger premises. The above picture shows Mr. Fisher's newly-erected implement factory at Tarlee. When thoroughly completed it will be one of the most up-to-date workshops in the country. Mr. Fisher has a powerful Blackstone oil engine installed to work the machinery ; also half-circle up-to-date portable forges, with blast 'attached. The factory, is well designed, most comfortable, roomy, convenient, and well-ventilated, and no doubt will be a comfort for the workmen, and will enable Mr. Fisher to cope with the very large number of orders for implements which he has hitherto had to refuse on account of no conveniences to turn them out quickly enough.

As well as his famous ploughs, Mr. Fisher has a new design of a stump jump cultivator; which is taking the attention of farmers. Its construction is very light, and in every way seems to be a perfect implement. Mr. W. Clark, of Tarlee. who has one working on his farm, says it is the finest implement he has ever worked, is very light in draught, and a perfect jumper.
Post, telegraph, and telephone offices are within forty yards of the factory, which will facilitate business in case of urgent orders. (1)

Lewis Fisher was born in November 1867 and had married Ellen O'Leary in the Catholic church in Manoora in February 1893. As early as 1903 many articles in the newspapers of the day were mentioning the implements made by L Fisher. He travelled throughout the mid north of South Australia displaying his cultivators and ploughs at the local shows. By the time his factory opened in Tarlee, Lewis was 41 and had five children.

The business prospered with advertisements .appearing in local newspapers. (2) IN 1911 the business was featured in The Observer, an Adelaide based paper with a wider reach than the local Kapunda Herald. Once again the article was accompanied by a photo.

Mr. Fisher's well-known Factory at Tarlee, which has had to be considerably enlarged to meet present demands, is now working at high pressure. Among his leading manufactures are S.J. Cultivators, much improved, and his "top action" and "jam beam" ploughs. Over a thousand of the latter are working in South Australia alone. (3) 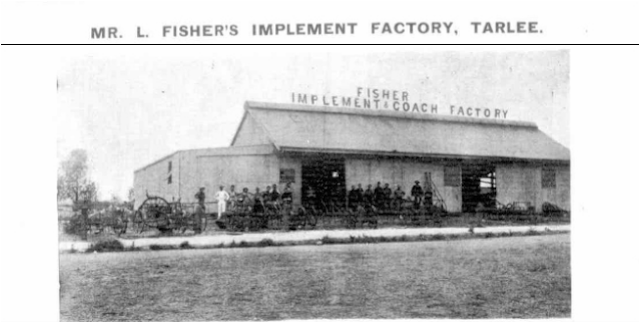 By 1912 Mr Fisher sold
his new and up-to-date house, together with blacksmith's plant, to Mr. W. Bordman (4)

By November of 1912 the Fishers had left Tarlee for a new life in Adelaide. (5)
Lewis Fisher died in October 1941(6) and his wife Ellen died in 1952 (7). They are both buried in the Catholic section of West Terrace Cemetery in Adelaide. 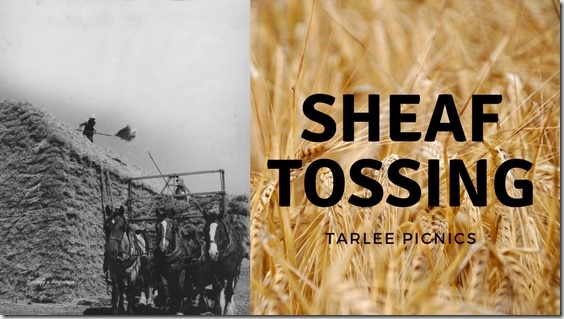 This article appeared in 1947 with the reporter and John McInerney reminiscing about the Tarlee picnics of days gone by. Like so many Trove articles it opens up more lines of enquiry so Tarlee sheaf tossing led me to the history of a mill in Gawler and an Italian musician who composed “The Cat’s Polka” and “The Canary Waltz.”

But first the sheaf tossing.  In the picture above you see sheafs of wheat being tossed by pitchfork from cart up to the man responsible for building the haystack. (1)

OUR esteemed old Riverton friend John Mclnerney confirms what Mr. Herb. Gray suggested about the origin of sheaf-tossing. 'Yes, it was my late brother Jim who first suggested a prize for sheaf-tossing at the Tarlee picnic more than 50 years ago. The method was to place a bar about as high as a load of hay, and competitors had to pitch the sheaf over this; the distance it went after was the deciding factor, As Mr. Gray stated, the sheaves were just as they came off the binder, and didn't stand very many throws. However, a plentiful supply was on hand and fresh ones were used. About 22 entries were received for the initial contest.


'Bowling at a single stump was also on the bill for the first time; and this is a popular event at picnic sports today. Another novelty was a polo race. Competitors lined up on hacks armed with a polo mallet, and had to thump a ball about 15 chains or so to the winning post. Swimming contests, too, were decided in a large pool close by in the Gilbert. 'For two or three years Phil Roberts ran here as a boy, but the committee insisted that he should in future run in the men's class.  Mr. Joe Denton, of Farrells Plat, was another good sport, and Mr. Bevan. 'A splendid luncheon was provided by the ladies— turkey and ham in plenty—with a help-yourself supply of pickles. I believe that the luncheon for 1/ was an attraction in itself. Setaro's Canary String Band supplied the music for the day and night, Really, in those days, the Tarlee picnic was spoken of as the Onkaparinga of the North.
'The railway was opened to Tarlee on July 1, 1869. Before this wheat was carted with bullock teams to Duffield's mill at Gawler. Fancy strolling beside a team of bullocks for such a distance. (2)

This article led me on more explorations. What was Setaro’s Canary String band and what was Duffield’s mill in Gawler?

From May of 1889 advertisements for Signor Francesco Setaro’s band started to appear in newspapers. Hundreds of events from then on, referred to this popular band which provided music of a great variety from opera to popular tunes.

Yearly socials of literary societies, church groups of various denominations, fetes, picnics, banquets and sports occasions were all enhanced with music provided by this band. Sometimes it was intermittent music between other recitals or dance music provided at the end of an evening function.

The band name with canary added in came about as recognition of  one of several popular pieces he composed - The Canary Waltz.

The background story is revealed in his obituary published in 1926. He had arrived in Adelaide at age 20 to play in a jubilee concert. He was already an accomplished musician who had been performing since he was 12. Slightly different details are provided in the various obituaries published by the newspapers, but at age 59 his illustrious career had come to and end. He was recognised as a generous citizen willing to contribute his talent and teaching skills to the citizens of South Australia. (3)

I then explored references to  the Gawler Mill and found through Trove that as early as 1862 additions to the mill were being made to cater for the quantity of wheat being delivered there.

The addition to Mr. Duffield's mill is fast progressing, and already overlooks the old building. When completed I should think it will be one of the largest mills in the colony, if not the largest of any. An immense amount of new wheat is being brought into the town, most of which at present finds its way to Duffield's mill; the mill and premises are literally crowded with wheat. (4) Fire was always a hazard for the mill. Disaster struck not just once, but at least three times. In June of 1867 the newspapers reported the complete destruction of the mill wherein the shafts and mill wheels were damaged beyond repair by the intensity of the heat.(5)

In September of 1867 the new foundation stone was laid and building of the new mill was expected to be completed by the end of 1868. (6) Work proceeded apace with the new mill officially opened in July of 1868. (7)

The new mill however was short-lived and in December of 1868 the residents of Gawler were awoken to cries of “Fire, fire” once more. Yet again Duffield’s mill was destroyed and out of action. An inquest was quickly established to determine whether there had been foul play. (8) By August of 1869 the rebuilding of the mill was almost complete. In 1876 another conflagration consumed the mill and all it contained. (9)

Once again the mill was rebuilt and reopened in February of 1877. It continued to trade under a variety of guises including producing compressed fodder during the Boer War. In April 1927 after years of standing idle the old mill was once again consumed by fire. (10)

IN 1928 the death knell was sounded for the Victoria Mill as it was known. It was demolished to make way for railway yards. Its chequered history was recalled in the 1928 article 1928 'THE LAST OF THE OLD VICTORIA MILL.'

Walter Duffield the owner of the Gawler and several other mills is profiled here in The Australian Dictionary of Biography.

Trove a true treasure of stories of the past.

The quarry at Tarlee From 1929 onwards a chatty column entitled Out among the People was established at first in the  The Register Ne...